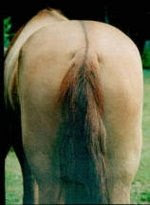 This news story has inspired me to initiate a new “award” that I will bestowing from time to time on deserving people, organizations, events in the world of sports. The Horse’s Patoot Salute will go to particularly outrageous and offensive instances of homophobia in sport. I like the image of “Horse’s Patoot” because awardees will be chosen based on their backward, rear view, out-dated and bigoted views on LGBT people and issues in sport. I will be the sole judge of who or what deserves recognition, but would love to hear from other folks who want to nominate a loser, I mean, winner.


Now, with no further adieu. I’d like to announce that (drum roll, please) the inaugural Horse’s Patoot Salute goes to youth travel baseball head coach Scott Kaletha and assistant coach Mike Schwanke of Michigan City, Indiana. One of the 12 year old boys on their team was being harassed by other boys calling him such creative names as “homo, queer, fag.” These adult men who claim to be coaches acknowledged that they knew this harassment was occurring, but said they didn’t see anything wrong in the boys’ actions or language. Kaletha said it was only "joking and humor" and "just boys being boys." Yeah, we’ve heard that before along with “normal hazing.” It wasn’t only that Kaletha permitted the boys on his team to harass their teammate with homophobic slurs, he also apparently encouraged it, even participated in it himself.

The news article also reports other unacceptable behavior by the these men who call themselves coaches that, if true, is equally outrageous – challenging opposing coaches to fights, arguing with umpires, getting thrown out of games, telling their pitcher to intentionally hit batters from the other team.

Michigan City Park Superintendent, Darrell Garbacik, suspended the so-called coaches for one year, but they are appealing their suspension. Hats off to Garbacik for taking his principled stand. Let’s hope the appeals board is equally enlightened.

Pat, I nominate Rhonda Rompola, women's basketball coach at SMU. The Dallas Morning News has a long article today about Jennifer Colli, a gay former player, and her suit against SMU, for revoking her scholarship, after Colli complained to the AD about coaches' inappropriate comments and questions regarding players' sex lives.

hello, i would like to read more about this interesting topic beacuase it is really interesting.

Keep up the good work.